Statues are furniture items. There are a total of 114 different statues: 31 decoration statues, 36 text and numerical statues and 47 functional mechanisms that have an effect when connected to wires and activated. Depending on the statue, upon activation it may spawn enemies, drop items, or teleport an NPC to the statue's location. Most statues can be found already placed in any area underground (most frequently in the Dungeon, Underground Cabins, and Cavern level), though Angel Statues also appear in chests. Like all furniture, a pickaxe is used to collect them.

These statues can be wired and activated to spawn enemies, drop items, or teleport a random NPC to their location. Statue-spawned enemies do not drop coins. Before the 1.4 update they generally would drop their other usual items at a reduced rate, with the exception of the Mimic, which will only drop its banner after the designated amount of kills. Since the 1.4 update, this is only the case with certain statues. Aside from normal items, Slimes spawned from statues may also drop hearts and mana stars, potentially granting an alternative source of health and mana. Statues found in Underground Cabins may be connected to Pressure Plates, and can easily spawn enemies that kill early game players.

Bomb, Heart, and Star Statues will not produce anything if there are already 10 of their item in the world, regardless of origin, or if 3 of their item is present within 16 tiles. Boulder Statues can only spawn a boulder every 15 seconds.

Decorative statues have no function and only serve as decoration. They are generally found placed underground. The three Lihzahrd statues are only found in the Jungle Temple, and are the only statues that do not appear to be made of stone. The Angel Statue is sometimes found in chests. The Armor Statue can also be crafted with 50 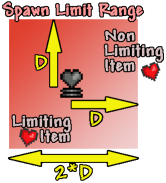 Activation of a spawning statue will not produce an item/character if a certain quantity of that entity already exists within a certain range. The range boundary is a circle, centered on the statue's spawning point.

Creatures spawned by Fish and Bunny Statues during a Blood Moon will immediately become corrupted. Corrupt Goldfish and Corrupt Bunny enemies do not count against the spawn limits, allowing quicker farming. The same is true of Goldfish which start walking during rain. Another exception is the Bomb Statue, since Bombs may group together into stacks of up to 99 and each stack counts as a single entity.

Bunny and Squirrel statues will spawn their usual critters in a Cavern town, not Gem Critters.