Statistics, usually shortened to stats, are numerical properties that represent various aspects of a player (or rather, the character) in an RPG setting. Stats determine how characters behave and how the game environment reacts to them. This page lists miscellaneous information regarding character stats in Terraria.

Aggro, short for aggression, is an invisible statistic that determines the distance at which enemies will begin to attack the player.

Attack speed determines the frequency at which a character's weapon is used by altering use time.

When a player's head is submerged in a liquid, a Breath Meter appears directly above the player, representing the time the player has until they begin drowning.

The character's damage type depends on what kind of weapon is used.

Defense protects the player from damage. Normally, damage that a player takes is reduced by half of their defense value rounded up, but in Expert Mode 75% of a player's defense applies instead, and 100% is applied in Master Mode. Players start with zero defense, but can gain more by equipping Armor and Accessories, as well as receiving bonuses from certain Buffs. If one's current defense would ordinarily block all incoming damage, they would instead take 1 point of damage.

Fall damage refers to the damage a player character sustains upon falling a large distance. 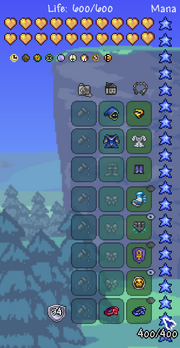 Health represents a player's ability to remain alive. All characters start with 100 Health, or five red hearts, upon creation. Health decreases when the player takes damage; when the player reaches zero health, they die. Players can increase their health through the use of Life Crystals to a maximum of 400, or 20 hearts. After this point, Life Fruit can be used to convert red hearts into gold ones worth 25 health, making the natural cap 500 health. Health regenerates itself by default.

The character gains 20 Health for every Life Crystal used. A maximum of 15 Life Crystals can be used per character, meaning a maximum of 400 Health for a character. The maximum life a Player can achiveve is 500 with the use of the Life Fruit, but these can only be obtained in Hardmode. This can be increased temporarily to 600 with the Lifeforce Potion.

Knockback is a basic mechanic whereby characters and enemies are repelled in the opposite direction of an attack.

Mana is a player's spell-casting ability. Use of Magic Weapons depletes the player's mana; if a player does not have enough mana to pay the cost of using a selected Magic Weapon, it cannot be used. All characters start with 20 Mana upon creation, or one mana star, with each star being equal to 20 mana. Mana Crystals can be used to increase mana by one star each, to a natural maximum of 200. This limit can further be increased by various Armors, Accessories, Buffs, and Modifiers, up to a maximum of 400. Mana regenerates itself by default.

Luck is a hidden statistic that influences the randomness of various activities.

Movement speed determines how quickly the player can travel around. A Stopwatch can display a rough estimate of the player's current movement speed. Many features can affect movement speed, such as Movement Accessories, Wings, Mounts, Minecarts and Liquids, along with certain Buffs, Debuffs, Armor and other hazards such as Ice Blocks and Cobwebs.

Leap a tall building in a single bound • “跳的真的、真的很高。”
跳地格外高。