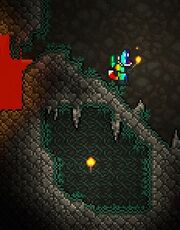 A small "moss chamber" featuring green moss, which has spread to stone outside of the chamber, and a matching back wall.

Moss is a grass-like plant that grows on Stone Blocks. It comes in five

colors, and one color can be found throughout each third of a given map (three colors per world), either randomly on cave surfaces or in "moss chambers" with a matching mossy stone wall. Moss sprouts fuzz that can be cut like grass weeds, or can be collected using a Paint Scraper on

移动版 1.4.0.1. Only a small percentage of such moss will drop as an item when using a paint scraper, the rest will simply disappear as usual. Collected moss can be placed on stone or Gray Bricks, or used to craft mossy stone walls. Mossy stone requires one more hit to break than clean stone. Moss will be destroyed if the stone block it is on converts to ebonstone, crimstone, or pearlstone.

Lava Moss is a special variant of moss that can only be found in the lava layers of the Cavern, though if harvested, it can be planted at any level. Despite not being considered one of the Glowing Mosses, it glows in the dark.

Glowing Mosses are special variants of moss that grow in Glowing Moss Caves in much larger areas than standard moss, and glow in the dark similarly to lava moss. It comes in three versions: Krypton, Xenon, and Argon. Only one type of Glowing Moss can be found in each world, in a total of up to 2 (Small) / 3 (Medium) / 4 (Large) areas in the Cavern layer, mostly above the lava layers, but not under the Spawn area.