After flight time has been exhausted, a player can continue holding the ↷ 跳 key to glide. Gliding fall speed can be accelerated by holding the ▼ 下 key in addition.

Flight is much more controlled with Wings than with Rocket Boots, Spectre Boots, etc. alone, and they allow for much greater flight range. Equipping Wings generally replaces jumps entirely with flight, rather than requiring a double-jump to activate. Double-jump accessories like the Cloud in a Bottle will still grant an additional jump, which is used after all flight time.

There are currently 47 unique wing types in total: 46 are available on

3DS版. Flight time and speed can vary by the version.

Most craftable wings are crafted at a Mythril Anvil or an Orichalcum Anvil. The four Lunar wings (Solar Wings, Vortex Booster, Nebula Mantle, and Stardust Wings) are instead crafted at the Ancient Manipulator.

All developer sets have a 1/20 (5%) chance to drop from Expert mode Treasure Bags from Hardmode bosses. All of the developer sets (except Aaron's set) have wings.

Airtime! • "享受风景。"
Stay in the air for enough time. 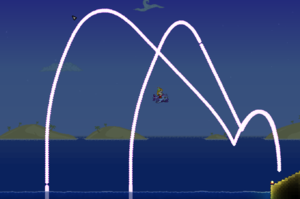 The paths produced by jumping with a Sandstorm in a Balloon with the player not wearing wings at all (left) and the player wearing wings on vanity (right). Notice the difference in the angles when the player ascends.
The player is jumping from the sand into the water.