, the Martian Saucer enters a second phase upon destroying all four turrets, whereupon its core becomes visible and can be damaged. During the second phase, the boss continually shoots a deathray that deals extreme damage, only bested by the Dungeon Guardian, enraged Skeletron, enraged Skeletron Prime, and the enraged Empress of Light. Prior to Update 1.4.0.1, this phase would occur regardless of if the world was in Expert Mode. 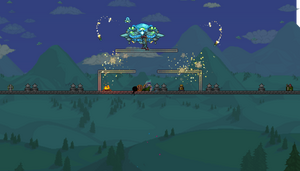 A bunker that shields the player from most attacks pre-1.4.0.1.