Thin Ice on some water. 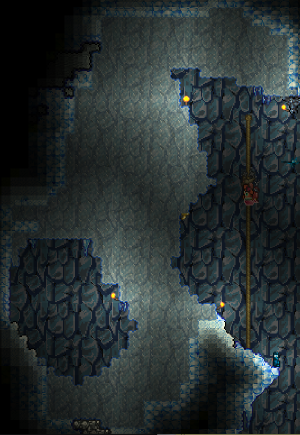 薄冰 is a type of block that is found in the 雪原 and 地下雪原 biomes. It is found naturally in two configurations: either a single layer over a pool of water, or in large packed regions underground.

Similar to 冰雪塊s, Thin Ice has reduced friction, and players will slide across it. Thin Ice will break if a player falls on it at a certain speed, usually achieved by falling normally onto it. Landing on Thin Ice will not cause fall damage itself, but it will not slow the player's fall on contact, and fall damage will continue to accumulate until the player lands on another block type. 溜冰鞋 or any of the combined 配飾 that use them as an ingredient can be used to land on Thin Ice without breaking it and dropping through.

Thin Ice is destroyed permanently when crashed through or broken with a 鎬, 鑽頭 or explosive items, dropping nothing. Blocks of thin ice cannot be picked up, crafted or moved in any way.